Intestacy in WA: in Western Australia, if you die without leaving a valid will, your estate will be distributed in accordance with legislation, namely, the Administration Act 1903.  “Intestacy” is the term given to this situation, and the person who has died without leaving the will is known as an “intestate”.  In order to administer the deceased’s estate, an eligible person will need to apply for Letters of Administration.

A partial intestacy can occur even if you leave a valid Will.  This commonly happens when a person fails to dispose of the entirety of his or her estate under the Will.  Many people will write a Will contemplating only the assets they own as at the date they write the Will, without contemplating the potential for their estate to grow or change, and therefore be different as at the date of their death.  In these situations, the executor named in the Will may apply for Letters of Administration with the Will annexed. 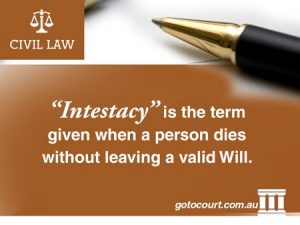 How your property is divided when you die intestate

Section 14 of the Administration Act 1903 contains a table which specifies who, of your family and dependants, receives your estate when you die and what percentage they receive.  For example:

Who may be administrator after intestacy in WA?

Section 25 of the Administration Act 1903 stipulates that the following people are eligible to apply for letters of administration (provided they are also over the age of 18 years and have mental capacity):

Applying for Letters of Administration After Intestacy in WA

The rules and procedures for applying for Letters of Administration are found in the Non-Contentious Probate Rules 1967.  Applications are made to the Probate Registry of the Supreme Court of Western Australia and can be made online if preferred.  The proposed administrator must swear on oath a number of things including:

The proposed administrator must also annex a Statement of Assets and Liabilities which lists and values those assets and liabilities that form part of the Estate.

After an application has been filed, the Probate Registry will consider the documentation and, if satisfied with it, will issue a Grant of Letters of Administration.  This is effectively an order of the Supreme Court which authorises the administrator to administer and distribute the estate in accordance with the law regarding intestacy in WA.
Civil Law, WAIntestacy