Breach of Bail in Western Australia

A bail undertaking is a promise in writing that you will come to court when you are required to and will comply with any conditions included in the bail undertaking. If you fail to obey any of those conditions you will be breaching your bail. A breach of bail in Western Australia is usually a criminal offence. Theses breaches are – failure to attend court without a reasonable excuse, breach of a protective bail condition and giving false information for the purpose of being granted bail or being approved as a surety for a bail.

The bail undertaking continues until the charges are finalised or the bail is revoked by the court. If you breach any of the conditions of your bail, an arrest warrant may be issued by the court. The Bail Act 1882 is the law that governs bail in Western Australia. 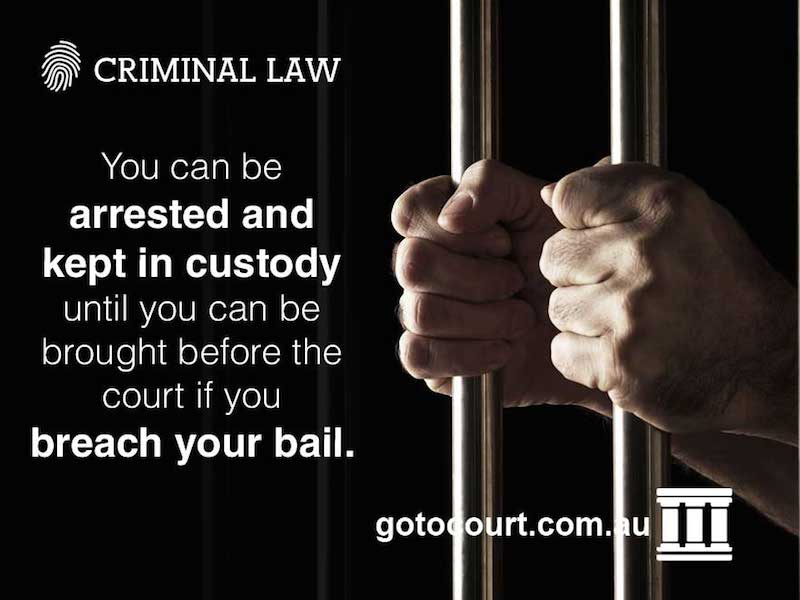 In Western Australia this offence carries a maximum fine of $10,000.00 and maximum prison sentence of 3 years. If you are convicted, it will appear on your criminal record and it will not be helpful to you in any future bail applications if you are ever arrested for another offence. If you have a good explanation or excuse for not going to court, you should bring evidence (such as a medical certificate) when you hand yourself in at the court. This will be taken into account when considering whether to charge you with failing to attend court and the court can also consider it when deciding whether to re-set your bail.

If your bail has a surety in it and you don’t go to court, your surety may have to pay the amount of money in the surety undertaking. If it includes a promise that you pay a sum of money if you fail to attend court, then you may have to pay that amount if you don’t attend.This offence carries a maximum fine of $10,000.00 and maximum prison sentence of 3 years. If you are convicted, it will appear on your criminal record and it will not be helpful to you if bail is being considered by a court in the future for another offence. A protective bail condition is a condition that was imposed to protect any person or their property, or to ensure there is no interference with any witnesses. The court considers a breach of a protective bail condition to be a serious offence and if you do commit a breach it may be very difficult to get your bail re-set.It is an offence to give any false information when you are applying for either a grant of or a variation of bail. It is also an offence for a person offering themselves as a surety on a bail to deliberately or recklessly make a statement which they know is false. The maximum penalty for either of these offences is a fine of $1,000.00 or 12 months in prison or both.You can be arrested by the police and kept in custody until you can be brought before the court if you breach your bail. At court, you will have the opportunity to explain why you breached your bail. The court can either re-set the bail, or revoke it (take it away) and keep you in custody. If you haven’t complied with your bail, you should go to court as soon as possible and not wait for the police to come and arrest you. This may help your application to have your bail re-set. If you do miss a court date for any reason whatsoever, it is a condition of your bail undertaking that you go to the court and hand yourself in to the police as soon as you possibly can afterwards.You may be able to apply to vary a condition of your bail if you find that it is now too difficult to do what that term requires you to do or not to do. You can only apply if you can show that there are new facts or a change of circumstances since the bail was granted that cause that difficulty. You must apply to the court where your charge is listed, either on the date when you are next due in court, or if you need to change it sooner, you can contact the court and ask for an early listing.