Civil Law » WA » Making A Will

A will is a legal document which stipulates how a person’s assets are to be disposed of when they die.  The person making the will is known as the testator, and the person who is appointed in the will to distribute the assets is known as the executor. This article deals with making a will in WA

After a person dies, their executor becomes their personal representative and must obtain a Grant of Probate, which is a seal from the Probate Registrar of the Supreme Court of Western Australia confirming the validity of the Will.  A Grant of Probate enables the executor to distribute the estate, and will almost always need to be produced by the executor when dealing with banks or other financial institutions, and Landgate, the land titles office. 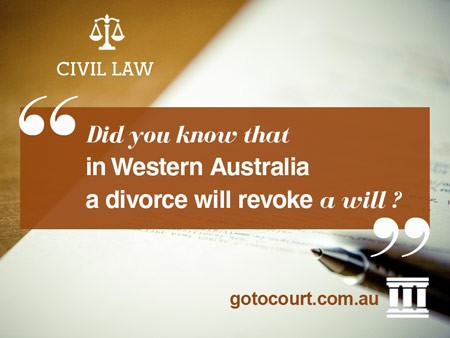 Legislation on making a will in WA

The Wills Act 1970  sets out the formal requirements for making a will in WA, the rules of construction (how the will is to be interpreted),when it can be revoked (annulled), and other matters relating to wills.  Under the Act, marriage revokes a Will, unless the testator has specified that the will is made in contemplation of marriage.  Divorce also revokes a Will.

A common mistake is where the testator fails to distribute all of the estate.  This is known as a “partial intestacy”, and that part of the estate which is not distributed under the will must be distributed in accordance with section 14 of the Administration Act 1903.

The role of the executor

As noted above, the executor is the legal personal representative of the deceased person and is obliged to obtain a Grant of Probate before distributing the estate. The process for obtaining Probate in Western Australia is found in the Administration Act 1903 and the Non-Contentious Probate Rules 1967.  If you would like further information on the procedure and costs of obtaining a Grant of Probate, go to the Supreme Court Probate Registry website.

The legal obligations of an executor are also set out in the Administration Act 1903.  As the legal representative of the estate, the executor is a trustee and holds the estate on trust to be distributed in accordance with the terms of the Will.  As such, executors are also subject to the Trustees Act 1962.  Trustees – and therefore executors – also have obligations under the common law and at equity.  They have fiduciary duties with respect to the beneficiaries of the estate, for example, a due to act with due care and diligence.

What happens after I die, if I don’t leave a Will?

If you die without making a Will in WA or without a valid Will then you die “intestate”.  If you die without leaving a valid Will then your assets pass to your partner and/or your closest surviving relatives (after payment of creditors), in the proportions stipulated under section 14 of the Administration Act 1903.  Most usually the persons who are entitled to a distribution under section 14 are also those people who may act as your legal personal representative when you die.  This person is known as the “administrator” and must apply for a Grant of Letters of Administration from the Probate Registry of the Supreme Court of WA.

Civil Law, WAMaking A Will