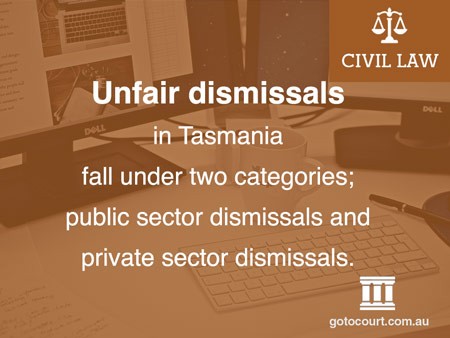 Public employees are those who are employed by the Tasmanian government. In these cases, unfair dismissal claims may be brought under the State Service Act 2000.

Under section 44 of the State Service Act 2000, the relevant Minster can terminate the employment of a State employee at any time with notice containing for the reasons for the dismissal. The reasons set out in the Act are;

An employee who has been dismissed from the Tasmanian State Service, and believes that dismissal contravenes one of these grounds, can ask for the matter to be reviewed by the Tasmanian Industrial Commission under section 50 of the State Service Act and section 19AA of the Industrial Relations Act 1984. An application for review must be lodged within seven calendar days of the dismissal (this does not include public holidays).

The Tasmanian Industrial Commission is the body in Tasmania with jurisdiction to hear matters relating to unfair dismissal claims by State employees.  The Commission has wide powers to conduct and resolve matters, including the authority to conduct dispute resolution (including mediation and conciliation) and to require witnesses to appear and documents be produced. If this is not successful, the Commission will then decide the matter via a hearing.

Section 385 of the Fair Work Act 2009 (Cth) provides a list of circumstances that must exist for unfair dismissal to have occurred. They are listed as;

The main onus of terminated employees is to prove that the dismissal in question was harsh, unjust and unreasonable and section 387 states what factors are used to determine what harsh means in this context.

To be eligible to make an application under the federal system, an employee must be covered by the federal system (not a state employee under the State Service Act, but including employees of local governments in Tasmania) and be employed for the required time period. For small business employees (small businesses employ less than 15 people) this is one year and for all other employee it is six months. If the employee earns more than $133,000 a year, they can only make an application if they are covered by a relevant award or enterprise agreement.